The 2020 Lexus RX received a new, fresh update for the generation launched in 2015.

It introduced a new, more aggressive front end and an updated Lexus multimedia system. Also, it has redesigned triple-beam headlights available as an option. The revamped Lexus RX is offered with two or three-row seats, with the versions named RX450h or RX450hL, respectively.

The newly refreshed grille was creates an elaborate look based on the “L-motif” logo. To create a balanced look that is both strong and elegant, each block grille has a different shape and angle. To harmonize the front end of the car, the bumper also has been restyled to match the grille.

Big changes were made inside as well, where a new, in-dash 12.3” touchscreen was installed. As before, in the Lexus way, it is paired also with the so-called touchpad remote between the front seats. The infotainment system was built to integrate Apple CarPlay, but now it is possible to connect with Android Auto also. A new feature is the Dynamic Voice Command (DVC), which recognizes millions more phrases than the previous Lexus systems.

The powertrain has remained the same hybrid system, with a 3.5-liter gasoline engine paired with two electric motors and a CVT transmission. While the V6 unit is responsible for the front wheels, the electric motors are pushing the car using the rear wheels. Unlike some other hybrid SUVs, the RX450h can be driven as an EV for short distances, but it is not a plug-in hybrid yet. 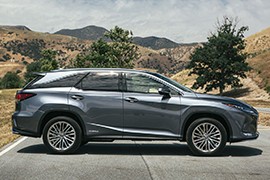