The world started to switch its attention towards SUVs, and Lexus tried to get a higher market share. Like its predecessor, the 2004 model year RX relied on the Japan-only model Toyota Harrier. Lexus offered the RX as an alternative for the sporty BMW X5, which enjoyed huge success on both sides of the Atlantic. Unlike its German rival, the Japanese SUV was not available with a turbo-diesel unit, which slowed its sales on the European continent.

From the outside, the RX featured a new design with curved, triangular headlights and a slanted grille incorporated in the hood's front side. Even though it was an SUV, its athletic profile with raked-forward tailgate and C-pillars created a sporty image. Its clear taillights created the appearance of an aftermarket improvement, even though it was standard.

Under the hood, the RX started its career with a gasoline-only V-6 engine. Later on, a hybrid version named RX400h became a sought-after SUV thanks to its high fuel efficiency, especially in FWD versions. It was the first premium hybrid vehicle on the market. 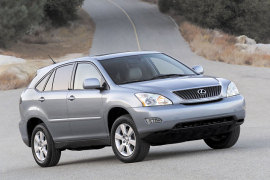 3 Toyota's 1UZ-FE V8 Once Humbled BMW, Mercedes, and Cadillac, They Could Do It Again