Mercedes-Benz scored a big hit with the ML's first generation, but Lexus was not far behind and introduced the RX in 1998, just two years after the German SUV.

When Lexus introduced the RX on the North American market, it overtook all other SUVs and climbed right to the sales charts' top. Mercedes-Benz was stunned since it launched the ML earlier, but Toyota just did a better job. Unlike its German rival, who chose the body-on-frame construction, the Lexus RX300 featured a unit-body construction, which translated into a lighter vehicle. Moreover, the Japanese premium carmaker was available with fuel-efficient engines.

The RX300 looked, somehow, like a 4x4 vehicle, but it lacked the rugged look. It didn't have any flat or bulky areas. At the front, it featured angular-shaped headlights with soft edges that surrounded the slatted grille from the hood. Its raked windshield was more angled than on most other off-road vehicles. But Toyota didn't want to sell the RX300 as a hard-core, off-road vehicle. Its greenhouse looked more like the one from an MPV or a station wagon due to the raked-forward rear windscreen. Only the lower part of the bodywork offered an off-road vehicle's statement due to the angular-shaped wheel-arches and the big wheels.

Inside, Lexus offered the RX300 with a standard leather-clad interior, but with just a few color options. It was either black leather-black dashboard and aluminum trims or tan leather, beige dashboard, and wood-trims. There was no other option for it. Also, a standard feature was the automatic transmission. The center stack resembled the one installed on the Land Cruiser. In the back, the 60/40 split-folding bench enlarged the trunk area, but it also featured a reclining system, suitable for long journeys.

Under the hood, Toyota installed only one engine option: a 3.0-liter V-6 that provided up to 240 hp. It was paired as standard to a four-speed automatic gearbox with a center-stack-mounted gear selector. 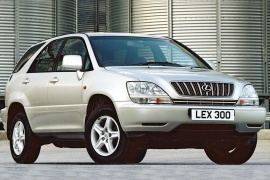