In its quest to offer more hybrid vehicles on the market, Toyota launched the NX compact SUV in 2014 at the New York Auto Show.

Three years later, it came with a restyling that made the car more appealing.

Toyota had committed itself to not offer diesel engines anymore for street vehicles or light SUVs. It retained them only for the HiLux pickup-truck and for some versions of the Land Cruiser. For Lexus, it deleted that option, and for the NX installed a hybrid system.

There were not so many exterior changes to the NX. It gave the car a stronger visual impact with a number of detailed changes including a new-look spindle grille, reshaped front bumper and LED headlamp units with sequential LED turn indicators. At the rear, there were adjustments to the form and finish of the lower rear bumper and new lamp clusters. New alloy wheel designs have also been produced.

Inside, there were new color options for the NX, with the addition of Rich Cream and Ochre upholstery and trim. The tailgate received a hands-free operating system. With the key in the pocket, a foot swipe under the rear bumper would open the trunk. A similar movement would close it. A new, 10.3” Lexus infotainment system was installed, with the mouse-like control on the center console. In the instrument cluster, a 4.2 TFT LCD was installed to offer more information to the driver.

Under the hood, there was the same 2.5-liter Atkinson engine, a generator, and an electric motor. Both front and all-wheel-drive systems were available. 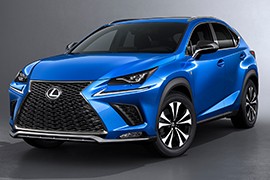