Lexus introduced the second generation of the LS model in late 1994 as a 1995 model-year on the U.S. market.

While the first LS generation stood on the market for five years, the second generation lasted for six years. The Japanese premium carmaker tried and succeeded in improving the model, despite the overall appearance. It looked somehow similar, but it was different from tip to toe.

It's classic styling with a three-box sedan shape was typical for a luxury sedan from those times. The front fascia featured a broad rectangular grille and same-shape headlights with corner-mounted parking lights. Its plastic, wrapped-around bumper sported the turn signals on the upper side, on the corners, while the lower part included a center grille. At the back, the taillights were split between the rear quarter panels and the trunk lid.

Inside, Lexus added almost two inches to the wheelbase from 110.8" (2814.3 mm) to 112.2" (2849.9 mm), increasing the legroom for the rear seat passengers. Not like they didn't have enough, but on the new model, they could stretch their legs. The carmaker worked hard to improve the soundproofing and transformed the cabin into one of the most silent on the market. Despite the added length and increased sound-deadening materials, the 1995 LS was 209 lbs (95 kg) lighter than its predecessor.

Under the hood, Toyota installed an upgraded 4.0-liter V-8 engine with better fuel efficiency, more power, and more torque. It paired it as standard with a four-speed automatic transmission. 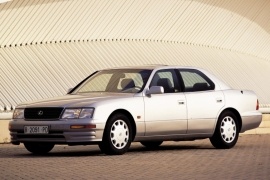