After presenting two previous LF-A supercar concepts, Lexus finally got to premiere the production version of its exotic car in October during the 2009 Tokyo Motor Show.

This incredible piece of engineering boasts a naturally aspirated, high revving 4.8L V10 and a carbon fiber-reinforced polymer (CFRP) body to make it lighter. The automaker had to create a one-off looming machine to create different CFRP parts for the supercar. The V10 unit was developed in partnership with Yamaha at Toyota's F1 engine plant. Production started in December 2010 at the Motomachi plant in Toyota City, Japa, and ended in 2012 after 500 units have been built. 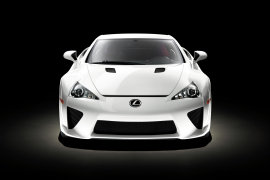