The Range Rover Velar was launched in the summer of 2017 and it came on the market with a name that was used before only for a pre-production model in 1969.

In 2017 there was an increasing demand for luxury SUVs around the world. Range Rover already had a complete lineup starting with the compact sized Evoque and continuing with the Range Rover Sport and up to the majestic Land Rover Range Rover. Unlike its bigger siblings, the Velar didn't feature a low range transfer box.

The Velar was squeezed between the Evoque and the Range Rover Sport. The headlights were offered with LED. It had a very raked A-pillar and a short greenhouse. Like it was born as a Range Rover Sport and then its roof was chopped. That led to smaller side windows. The door handles were hidden flush to the bodywork and they popped out only when the car was unlocked. Range Rover said that it was a security measure so nobody could grab the handles while the car was stopped at a stop-light.

Inside the Velar there was room for five adult occupants. Depending on the trim level, the dashboard could get three displays. A TFT for the instrument cluster, another one for the infotainment system and a third one for the climate controlls.

Under the hood, the Velar was offered with a choice of diesel or gasoline engines, with four or six cylinders, mated with a standar 8-speed automatic transmission. 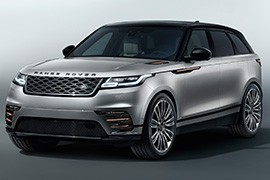