2 Not All Classics Are Worth Rescuing: 2004 Land Rover Discovery Sentenced to the Crusher

The Range Rover Evoque is based on the Land Rover LRX concept presented by the manufacturer at the 2008 North American International Auto Show.

What was so special about this concept was that Land Rover was using plenty of efficiency-orientated technologies for it, including lightweight construction materials, regenerative brakes, a stop-start system, and the ERAD (electric rear axle drive) parallel hybrid powertrain system, which was placed on the rear axle of the car and could have started it before the engine was ignited. This technology alone would lead to a 20 to 30 percent decrease of CO2 emissions.

One year later, the UK Government proceeded to a £27 million grant for the construction of this vehicle, on the condition it would be built in Halewood, Liverpool. The Range Rover Evoque was officially unveiled at the 2010 Paris Auto Show.

The Evoque Coupe had a lower roofline and did not offer much headroom for the rear seat passengers, however, overall, the Coupe was still a comfortable and roomy enough car for 4 passengers.

For 2011, the Land Rover did not bring any hybrid or electric versions of the Evoque and offered the public two diesels and one petrol engine. The first two developed 150 bhp or 190 bhp, while the petrol one produced 240 bhp. 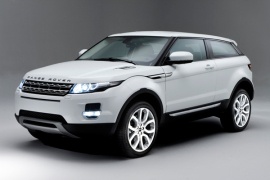