Land Rover introduced a facelifted version for the fourth generation of its flagship model Range Rover (L405) in 2017, and it was more than just new paint and a set of wheels.

For almost 50 years, the Range Rover dominated the luxury SUV market. Along the road, regardless of who owned the brand, it was considered by many the true competitor for the Mercedes-Benz S-Class. And, in some ways, it really was. Even when the Big-Three introduced luxury SUVs, they couldn't match the same prestige that the Range Rover had.

In 2012, Land Rover L405 broke the Internet, and it became an instant sensation. Despite being luxurious and big, it was also light, thanks to its aluminum bodywork. One of the most striking differences between the 2012 and the 2017 versions was noticed at the headlights. The facelifted version featured rectangular DRLs instead of rounded ones. Also, the front bumper was slightly different.

Inside, the revised version featured a completely new infotainment system with a squared touch-screen atop the center stack and an additional screen for the climate control unit. Inside the instrument cluster, Land Rover placed a TFT display instead of the older dials and gauges. Thus, it opened the doors for the next generation of luxury cars. A generation where, with a gesture, the occupants could open or close the doors, raise and lower the blinds.

Under the hood, the most important upgrade was for the plug-in hybrid version, which proved that a big SUV could get a better fuel efficiency than most econoboxes on the road. And it could do that while traveling on all kinds of terrains. 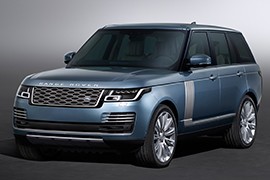 3 Range Rover Gets Stolen, Owner Buys a Second One, Stolen as Well - Thank God for AirTags