2 Not All Classics Are Worth Rescuing: 2004 Land Rover Discovery Sentenced to the Crusher

While the first generation of the Freelander was built in cooperation with BMW, the second generation was developed together with Ford and improved in 2009.

When Land Rover started to built SUVs, the result was a more capable off-road vehicle than many off-road vehicles with low-range gear. The Freelander 2 was exactly that kind of vehicle. Its main advantage was the Terrain Response system, which enabled the car to transfer most of the engine's torque to the wheel with the most traction. And that was not just advertising. After Land Rover and Ford took different paths, the British carmaker improved its lineup, and that included the "Baby Landie."

The Freelander was already a known nameplate since 1997. The second generation was introduced in 2006 under Ford ownership. The 2009 model-year had to comply with the Euro 5 norms, and that included more than just a cleaner engine. From the outside, the Freelander 2 facelift featured new headlights with clear glass and a bolder grille. The rear taillights were changed as well, with rounded lamps under a clear-cover.

Inside, there were minor, aesthetic changes. The biggest evolution was made under the car's skin. There was a new climate control system that allowed it to function even with the engine stopped at a stop-light.

The 2.2-liter turbodiesel engine remained the main powertrain option for the European market. It was even installed on a 2WD version to improve the fuel-efficiency and decrease the CO2 emissions for the British brand. The terrain response was improved for the all-wheel-drive versions. 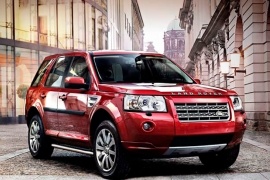