In 1997 Land Rover was part of the BMW Group and introduced the Freelander as its first unibody SUV on the market. In 2003, it received a major facelift.

The Freelander was also known as the "Baby Land Rover" since it was the youngest and smallest car in its stable. Despite being an SUV without low-range gear, it was able to cope well in rough terrain with ease. Its BMW diesel engines and the Land Rover all-wheel-drive system worked well together, and the compact SUV was one of the best-sold 4x4 vehicles in Europe.

Like most of the facelifts, the Freelander received a new front fascia. That included new headlights, new bumpers, and new taillights. The redesigned bumper received a different pair of lights in the rear, less exposed to bumps and scratches. Land Rover didn't bother to paint the door handles and the moldings on the wheel arches in the same body color.

Inside, the Freelander received a new dashboard and instrument cluster. The designers installed a pair of cup-holders above the center stack. There was a new layout for the dials as well, with the fuel gauge and the coolant temperature placed between the speedometer and tachometer. Like its non-facelifted version, the Freelander featured a split-folding rear bench.

Under the hood, Land Rover installed a choice of gasoline and diesel engines. While Rover provided the gasoline units, the diesel version was powered by an especially tuned 2.0-liter turbodiesel built by BMW. 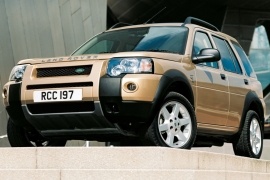