When BMW bought the Land Rover from British Aerospace, it found the Freelander as an almost finished product and worked only on the facelifted model, which appeared in 2000.

The first generation of the Freelander was longer than the Range Rover Series 1 and featured a longer wheelbase than the former company's flagship. It was a beloved car and, for five years, it dominated the compact-SUV segment, but it didn't do that alone. BMW helped it fixing the problems and, in 2000, it launched a refreshed version that included a German turbo-diesel.

Its exterior still looked fresh, but the management didn't want to go with the same image as the 1998 model, so it demanded some changes. At the front, the 2000 model sported new headlights with clear turn signals, but the massive black bumper with an integrated shield at the bottom remained. Depending on the trim level, the shield was either silver or body-colored.

The car designer, Gerry McGovern, struggled to find more interior room for the passengers. He forced the engineers to find a solution for the transmission tunnel to get a flat floor for the rear passengers. They couldn't delete it entirely, but they were pretty close. As a result, the Freelander was an actual five-seat vehicle fit for five adults.

Under the hood, BMW insisted on installing the German 2.0-liter turbo-diesel used on the BMW 3-Series. It was a far better option than the Rover's inline-four oil burner. It got higher power and improved fuel efficiency. 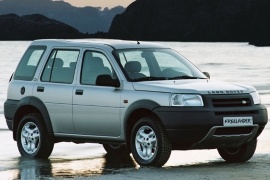