At the end of the '80s, Land Rover desperately needed a new product, and it developed it after British Aerospace bought the Rover Group in 1988.

The development program took almost a decade, but the Freelander exceeded the expectation. It became the most successful vehicle in Land Rover's history and market leader for five years in a row. But it wasn't developed with BMW, as some would think. The project was almost done when the German carmaker acquired the Rover Group in 1994.

Gerry McGovern signed the design, and it was a mix between an off-road vehicle and a compact station wagon. At the front, he installed the headlights up above the bumpers to protect them from bushes and other mild obstacles, shopping-carts included. The functional design worked well for the bumpers, where large areas of black, scratch-proof plastic were left unpainted. Its two-step roofline resembled the Land Rover Discovery shape. Both Frelander versions featured a power sliding window on the tailgate and high-mounted turn-signals.

Inside, McGovern designed an interior. He wasn't satisfied to stuff all the necessary parts and call it a day. He placed a significant number of storage places in and on the dashboard, in the door panels, in the center console, and a locking one in the trunk's floor. He convinced the engineers to find a solution, so the transmission tunnel was almost deleted, which helped achieve a great interior room, especially for the five-door version. 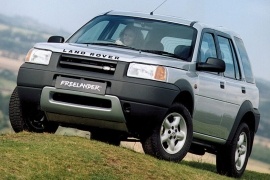