Land Rover introduced the last update for the Defender lineup in 2012, before completely retiring it in 2106 when the car couldn't pass the Euro6 standards anymore.

Born out of necessities in the late '40s, the Land Rover was a utility/family transportation vehicle that was constantly updated on the years to come several times. After it was named Series I, II, and III, the vehicle sported the name 90/110, according to the version's wheelbase. Come 1990, and the car got a new name: Defender. That version was constantly upgraded.

For the 2012 model year, the Defender got a slightly restyled front fascia, with black trims around the headlights. The slatted grille was the same and still made from plastic. The bumper, though, was still from solid metal. But the rearview mirrors were still black and only manually adjustable by rocking them from the outside.

Inside, the 2012 Defender couldn't be too much upgraded. As an option, it featured sort of an infotainment system, with a screen bolted atop the center stack. An AC unit blew cold air only through the mid-vents. In the instrument cluster, the old dials sported silver surroundings and green illumination.

The most important upgrade was under the hood, where the Defender 90 got a 2.2-liter, Ford sourced turbodiesel. It was an evolution of the powerplant installed in the Ford Transit utility vehicle, upgraded to Euro 5 emission standards. The only transmission available was a six-speed manual and a two-speed transfer case that sent the power in all corners. 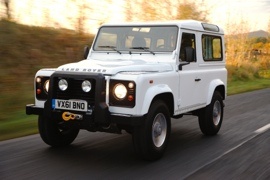