Its history began in 1948, and the Defender was, basically, the foundation for the Land Rover brand. But what started as a temporary rugged vehicle became a status car. In 2007, Ford already owned Land Rover and tried improving the car with some of its components to cut the costs.

The car's overall look was still like a box on wheels with two headlights attached to the front fascia. Its flat nose and short overhang allowed the Defender 90 to achieve outstanding approach angles compared to other off-road vehicles. Its grille was slightly pushed outward to make room for the thicker radiator behind it. As for the bumper, it was still metallic with some rubber endings. On the sides, the door handles were built so the driver could use them with gloves on. At the back, the Defender featured a side-hinged door that supported the spare wheel.

Inside, it was the same cramped and unforgiving driving seat close to the door. The new modular dashboard allowed the carmaker to adopt the left or right-hand drive production quickly. Between the front seats, the carmaker added an option for a big storage compartment with a lid and the transmission levers: one for the gearbox and the other for the transfer case. In the back, there was little room for two adults.

Under the hood, Ford installed a new 2.4-liter engine carried over and re-tuned from Ford Transit light commercial vehicle. A six-speed manual was the only option. The only drawback for the 2007 Defender was the lack of a rear differential lock system. Ford engineers thought that an electronic, ESP-based system could do the same thing. 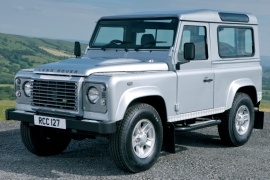