The Lancia Ypsilon was one of the most popular cars in its segment.

Back in 2015, it was the only model Lancia still produced.

The Ypsilon’s roots are to be found in the Lancia’s Autobianchi Y10, the first premium subcompact launched in 1985.

The first generation of Ypsilon was brought to the public in 2003, a vehicle that was bigger and more spacious.

The 2015 model came with a refreshed exterior design, as well as a modernised cabin along with new technology.
The exterior got a mix of soft lines and wedge-shaped features. In the front, the Ypsilon had a large chrome grille with large halogen headlights.

The passenger doors were camouflaged as the rear handles were hidden hear the third pillar, a nice visual effect.

The cabin was given great attention to details, thus making it bright and welcoming for the passengers, giving a feel of a bigger and more expensive car.

The engine options was large, customers having to choose between a 1.2-liter petrol engine that was quiet and not thirsty at all, two 1.3-liter diesel with power ranging between 78 and 95 hp and also LPG and methane versions, which were of great success. 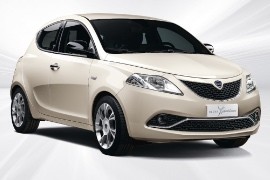 1 See Italy's Most Stubborn Driver in Action, the Car's Clutch Gives Up Before He Does