Lancia refreshed the Dedra twice between 1989 and 2000 when it ended the production, and the second facelift introduced in 1995 cut its power and made it more affordable.

Based on the same platform with the Fiat Tempra and Delta's second generation, the Dedra was built by Lancia as a successor for the Prisma, but the results were less than satisfactory. It managed to sell the car in just 414,084 units in both versions: sedan and station wagon. That meant less than 40,000 units per year.

Strangely, the Italians were caught on the wrong foot with Dedra's design. While the rest of the carmakers started to get into the bio-design trend, the Dedra featured a late-'80s look with sharp lines, angular headlights, and taillights. With the '95 refresh, the carmaker tried to soften the lines, but it was not enough.

The interior sported the same materials. They were good, with nice velour upholstery and the same dashboard like the one fitted on the first facelifted version. It featured a nicely curved top section over the instrument panel and the center stack. It kept the most important advantage of the car, the very wide door aperture, which made the ingress and egress easier.

But under the hood, Lancia focused on customers' choices, not on their engineers' dreams. While the Dedra was available with a turbocharged all-wheel-drive system, the buyers turned their eyes to the 1.6-liter naturally aspirated gasoline units and the 90 hp turbo-diesel engine. Lancia kept the "Integrale" (all-wheel-drive) version, but only for the naturally aspirated, 136 hp 2.0-liter 16-valves unit. 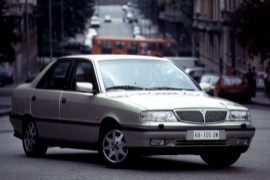