The 2000 Coupe was the last Lancia before the brand was taken over by Fiat.

It was designed by Pininfarina and it bared its logo proudly on the fenders.

The 1971 Lancia 2000 Coupe was the continuation of the Flavia Coupe and it was built to be fast, comfortable, and way less expensive than the full-size GT cars from that era. It was a luxury car, but fast and nimble.

The car was designed to carry four adults, with enough headroom for the rear passengers. The clean, simple lines made it beautiful. The curved greenhouse resembled other coupe vehicles designed by the Pininfarina studios. It featured stainless steel bumpers and special magnesium alloy wheels, named Cromodora. The HF version had plastic bumpers. The low front profile was possible due to the use of a boxer-4 engine and the big, four headlights had chromed rings around them. Also, the grille was chromed.

Inside, the design team might have been inspired by the Ferrari 330 GT. The dashboard was interesting. The center dial was for coolant temperature, and next to it was the oil pressure gauge. The speedometer and the tachometer were the biggest dials on the aluminum instrument panel. A Nardo wood steering wheel was added to enhance the premium feeling of the car. For the rear passengers, there were ventilation outlets on the C-pillars and the rear windows could have been opened in a pop-out style.

The technical base was very advanced for that era. The flat-four engine offered 115 hp from the 2.0-liter displacement, while the HF featured a Bosch injection system. 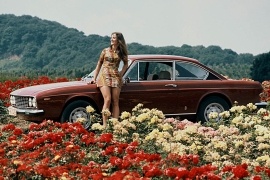