Developed on the base of the Lamborghini Huracan Performante, the Spyder was the open-top version of the famous Italian supercar and it was almost as fast as its hart-top sibling.

There was always a demand for open-top performance vehicles even though it was known that the coupe-versions are lighter, stiffer, and faster on a track. But when the driver wants to enjoy the open top driving experience and hear the brutal sound of a naturally aspirated V10 echoing through a tunnel, that tenth of a second slower version won't be an issue.

The Huracan Spyder Performante (or Performance) started from the same basis as an Lamborghini Huracan Performante. The exterior look was very similar, except with two big noticeable differences. First, it was obvious, the roof that could be fold away in 17 seconds behind the cockpit, and the second, was the metal covering of the engine. On the coupe version, that side of the bodywork was covered by a piece of glass.

Inside, there was a new layout for the buttons on the center console, to accommodate the button for folding/unfolding the roof. The soft-top can be removed or put back at speeds up to 50 kph (31 mph).

The Lamborghini had to readjust the ALA System, which stands for Aerodinamica Lamboghini Attiva (Lamborghini Active Aerodynamic) to not compromise the efficiency at high speeds. Its reaction time was 500 milliseconds, ensuring the car's best aerodynamic set-up in every driving condition. 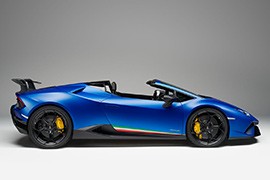