Lamborghini ended its customers' wait and introduced the two-wheel-drive Hurracan in 2016, and the result was a less performant and more playful car.

Lamborghini was not keen to make an all-wheel-drive car in the '80s, but it had to admit that the engine power became too high for a two-wheel-drive vehicle. But in 1993, the Italian carmaker made the Diablo VT with a viscous center differential (VT stood for Viscous Traction). When Audi stepped in, the German carmaker pushed the carmaker in the all-wheel-drive era for most of its models. But somewhere, the Italians knew that a Lamborghini driver would seek the traction limit and would try to make some donuts in a parking lot or a slide on a track-day. So Lamborghini made the Huracan 580-2 specifically for them.

From the outside, there were slight differences between the all-wheel-drive Hurracan and the 580-2 version. On the rear-wheel-drive version, the carmaker added a horizontal slat in each of the front wide side-scoops. In the middle, the lower lip was black regardless of the car's color, while on the all-wheel-drive model, it was body-colored.

Inside, the 2016 Gallardo 580-2 featured a pair of sport bucket seats with high bolstering on their sides. The carmaker placed the buttons for the transmission, the parking brake, and the engine starter on the massive center console. The car was available exclusively with a seven-speed automatic (dual-clutch) transmission with paddle shifters mounted on the steering column.

Lamborghini installed the same 5.2-liter V-12 from its all-wheel-drive sibling in the engine compartment, but the engineers de-tuned it by 30 ponies to 580 hp. In addition, since the car's front was lighter after the engineers removed the differential and the drive-shafts, the mass distribution changed to a 40/60 ratio. 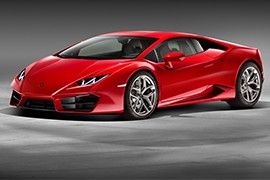