3 Someone Thought the Lamborghini Countach LPI 800–4 Looks Bland, so They Did THIS to It

4 Once Owned by a Famous Rock Star, This Countach Has Traveled Around the Globe

Lamborghini introduced the Gallardo in 2003, but the carmaker was not convinced that an open-top version might be a good idea for a sports car enthusiast. Yet, it was.

The Gallardo was the most successful Lamborghini ever built and the second supercar launched by the Italian brand under Audi's ownership. The carmaker took baby-steps in developing a new range of vehicles and didn't create an open-top Gallardo until 2006, which was unveiled in January at the Los Angeles Auto Show. The Spyder version counted for about one-third of the Gallardo lineup sales.

Its design continued the angular shapes introduced in 2001 by the Murcielago lineup. Its angular headlights and short front were followed by a very raked windshield and a short cabin followed by the engine compartment's lid. Its wide rear fenders featured massive air-intakes. In the back, the design team returned to the angular shapes and installed vertical, squared-looking taillights. The dual exhaust popped through the rear bumper above the splitter.

The cabin was cramped and fit for two occupants, separated by a massive center console. Its leather-clad interior was better finished than some of the other Lamborghini vehicles before the Audi-era, but some Audi A3 buttons and switches spoiled the exclusive car's look. Depending on the version, the car featured buttons for the automatic transmission selector or a short gear-stick.

Under the hood, Lamborghini dropped a 5.0-liter naturally aspirated screaming V-10 that could rev up to 8050 rpm while the engine provided its peak power at 8,000 rpm. Thanks to its all-wheel-drive system, the Gallardo promised to be a daily-driver supercar and directly attacked the Ferrari F360 and Porsche 911 Turbo customers. 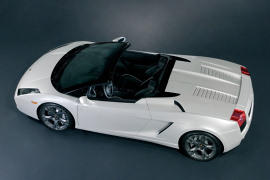