After Audi purchased it, Lamborghini started to work on a new lineup. With some help from German engineers and ItalDesign Giugiaro's design, the final result was a stunning-looking car powered by a completely new V10 engine. The Italian brand was back on track.

Short, flat, and wedged-shaped, the Gallardo kept the Lamborghini design language alive. Its long, angular headlights and short front were followed by an arched greenhouse and a flat engine lid in the back with vents. Its wide rear fenders featured massive air-intakes to cool and feed the engine. In the back, the design team returned to the angular shapes and installed vertical, squared-looking taillights. The dual exhaust popped through the rear bumper above the splitter.

Inside, the Gallardo was cramped and fit for two occupants, separated by a massive center console. The leather-clad interior was better finished than some of the other Lamborghini vehicles before the Audi-era, but some Audi A3 buttons and switches spoiled the exclusive car's look. Depending on the version, the car featured buttons for the automatic transmission selector or a short gear-stick.

Under the hood, Lamborghini dropped a 5.0-liter naturally aspirated screaming engine that could rev up to 8050 rpm while its peak power was provided at 7.800 rpm. Thanks to its all-wheel-drive system, the Gallardo promised to be a daily-driver supercar and directly attacked the Ferrari F360 and Porsche 911 Turbo customers. 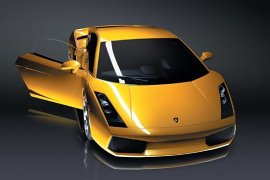 1 In Philippines, a Desert Beige x CF Lambo Urus Is the Right Kind of Showstopper

2 Classic Lamborghini Countach Gets Wrinkled Up in Norway, Age Had Nothing to Do With It

3 Your Lamborghini Smartphone Case Was Destined To Be Seat Upholstery