The Samara was the Russian way of saying that they could build cars even without the Italians' help, and the result proved that they couldn't, at least in 1984.

In 1984, the Russian carmaker AvtoVaz introduced the Samara to the market. It was a big success for the communist company to switch from a longitudinally-mounted engine and rear-wheel-drive system to a more modern transverse front engine and front-wheel-drive system. To do that, the engineers took their inspiration from other European carmakers, where Lada sold the car. Lada was the commercial name for the AvtoVaz (which was an acronym for Volga Automobile Factory).

The form-follow-function was the car's main theme, and the sedan shape was the main choice for Russian customers. Its square-looking headlights and almost closed front grille evoked a simple design system with straight lines. In the back, the flat and slightly sloped trunk lid was often adorned with a small spoiler.

Inside, there was a cubist design language with straight lines and a boxy instrument panel. The very optimistic speedometer showed a speed of up to 180 kph (112 mph), while the car was able to go as fast as 156 kph (97 mph). The cranked windows were the only way to open them, and there was just a simple ventilation system without air-conditioning. On the Western Europe market, the dealers installed aftermarket an audio system with a stereo-cassette. An unusual feature for the sedan was the folding rear bench, carried over from the five-door version.

Under the hood, the Soviet engineers installed a 1.3-liter or a 1.5-liter gasoline engine fed by a carburetor and paired it to a 5-speed manual gearbox. Later on, Lada introduced a fuel-injected version for the 1.5-liter version. 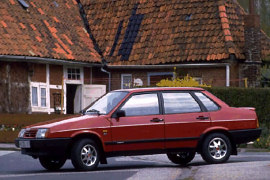