While in Europe, the three-door versions of a hatchback were considered sportier, in the former Soviet Union, a three-door Samara was the cheapest in the stable.

The Samara was not a replacement for the Fiat-124 based Lada but an evolution to a new range of vehicles easier to drive and built. The Russian engineers studied the Fiat 127 from its long-time Italian partner and admitted that it was a much better solution than the front-engine and rear-wheel-drive one. It evolved into a range of vehicles, from a three- and five-door hatchback to a five-door station wagon and a four-door sedan. Since the three-door version was the cheapest to build, it was the first to be released on the market. It required only the door windows and two side windows behind them. A touch of artistic imagination was at the back, where the carmaker made a sloped tailgate instead of a flat vertical one.

Inside, there was a cubist design language with straight lines and a boxy instrument panel. The wildly optimistic speedometer showed up to 180 kph (112 mph), while the car was able to go as fast as 156 kph (97 mph) on a downhill. The cranked windows were the only way to open them, and there was just a simple ventilation system without air-conditioning. On the Western Europe market, the dealers installed aftermarket an audio system with a stereo cassette. Its wide opening doors and the tilt-forward front seats allowed an easier ingress and egress to the car.

Under the hood, the Soviet engineers installed a 1.1-liter gasoline engine fed by a carburetor and paired it to a 4-speed manual gearbox. Over time, there were new engine options that increased power output. Lada fitted the late models with a 5-speed manual. 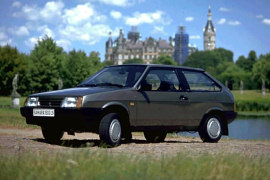