Developed together with Porsche, the Lada 111 was the hatchback version of the Lada 110 sedan, and it was introduced in 1999 by the Russian carmaker Avtovaz.

The transition from a licensed Fiat 124 with a carbureted engine to a front-wheel-drive 1.6-liter fuel-injected engine was a big leap ahead for the Russian carmaker. The German carmaker Porsche helped the Russian engineers to develop the car, and the project was ready to go into production in 1990. Still, the political events prevented it, and the program was postponed for another eight years until the first vehicle rolled out from the assembly line. It was the Lada 110. Later on, the car received new body shapes, such as the 112 hatchback.

The 112 featured narrower, rectangular headlights. Its grille was almost completely covered, with just a small cut on the lower side. An additional cooling area was installed on the lower side of the bumper. The hatchback featured a set of triangular windows behind the rear doors. A nice addition for the Lada was the optional wing placed on the tailgate, on the rear window's lower side.

Inside, the car featured a design that was closer to the '80s vehicles than to those from 1995. There was no airbag for the driver or power-windows for the standard trim level. Inside the trapezoidal instrument cluster, the designers installed white lettering on black dials and red needles. There were two seats at the front and a bench in the back with a folding seatback to expand the trunk area.

Under the hood, Avtovaz installed a choice of four engines ranged between 70 hp and 94 hp. There was no automatic gearbox on the options list. 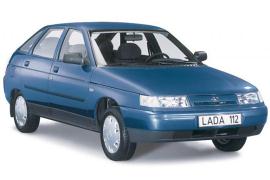