KTM tried to make its way into the four-wheel motorsport and built the RR version of its X-Bow roadster, squeezing more power from its Audi engine.

When a motorcycle maker tried to make a car, it took the motorcycling guidebook, and the result was a stripped-down, light roadster. The X-Bow (Cross-bow) was the Austrian roadster made to impress and wow the crowd, while the RR version was tuned for race-weekends. The Austrian brand built it and rented them for those who attended the KTM racing series. It wasn't cheap, but it was with rental vehicles, so drive it like you stole it principle was applied.

The X-Bow was a carbon-fiber bodied go-kart, just way bigger. Its design was very similar to the standard vehicle, but the unpainted carbon-fiber elements looked more spectacular. At the front, an orange tow-hook peaked through the front spoiler, while on the sides, the white decals that showed the vehicle version tried to tell everyone that that was not a regular, 240 hp version.

Since it was a race vehicle built for the adrenaline-seekers, the open cockpit sported a racing-seat with FIA homologation number on it. KTM included a six-point harness. Don't expect anything else than an LCD for the instrument panel, and that's exactly what KTM placed in front of the driver.

Under the hood, KTM installed the same inline-four, turbocharged four-pot engine shared with the S3 but tuned to offer up to 365 hp. That power varied from race to race and depending on the race-engineers. Its six-speed manual gearbox sent the power to the rear wheels. 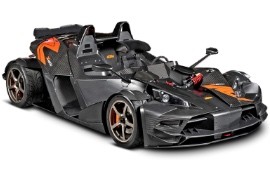