The Austrian motorcycle builder KTM launched the X-Bow in 2008 as a track-weapon, feather-light two-seat roadster, and five years later, it made it better for road use.

KTM X-Bow was already notorious among race-car lovers. Its Dallara-designed, carbon-fiber roadster proved to be very fast despite its only 300 hp engine. The secret stood in the vehicle's weight, which was reduced to a ridiculous 790 kg (1740 lbs). But the driver and its passenger had to wear a helmet and a jumpsuit since there was no windscreen nor roof above the cabin.

The Austrian motorcycle manufacturer made an important upgrade for the roadster in 2013 when it decided to install a windshield and side windows but no roof. The X-Bow GT was just 57 kg (125 lbs) heavier than the original X-Bow. KTM included a mandatory windshield wiper.

Since the GT version was designed for Gran Tourismo travels, KTM introduced a set of, specially tailored handbags. Also, there were a few comfort features, such as a heating and ventilation system with controls installed on the center console. Moreover, the Austrian engineers considered installing an illuminated footwell. From inside, the three glass panels inspired a helmet-view for its occupants.

Under the hood, KTM installed the same 2.0-liter engine carried-over from Volkswagen GTI, tuned to produced 300 hp. It was paired to a 6-speed manual and sent its power to the rear wheels. 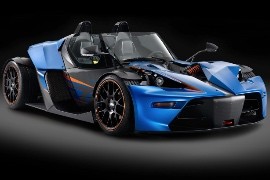