Koenigsegg tuned the CCX model and made it even faster and track-ready than before in 2007 when it introduced the CCXR version.

Even though there was a waiting list for customers who were trying to get their hands on a new CCX, the Swedish car manufacturer decided to give them a little surprise and introduced the R-version, which, unlike its non-R version, passed the 1000 hp barrier.

With its sleek, aerodynamic profile, the CCXR showed the same stance as its non-R sibling. Its cabin resembled a jet-fighter cockpit more than a race-car one, and the carmaker didn't hide that its intentions. In the back, Koenigsegg installed a bigger, twin-blade wing and a different diffuser. All the aerodynamic enhancements increased the downforce up to 350 kg (771 lbs) at 250 kph (155 mph). Depending on the customers' options, the car could sport different colors for the front and side splitters and for the rear diffuser.

Inside, the car manufacturer installed a luxurious, leather-clad interior and anodized aluminum trims. The center console sported the telephone-dial design for various functions. The Swedish carmaker installed a JVC one-DIN navigation unit for the sound system, which looked too mass-market for the car's price.

Under the hood, the car manufacturer revised the 4.7-liter Ford V-8 engine. Its displacement was slightly increased and, if fueled with biofuel E85 was able to provide 1032 hp. It was paired exclusively to a six-speed manual gearbox but with paddle-shifters behind the wheel, an exclusive patent developed by Koenigsegg. 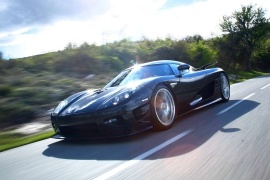