Koenigsegg introduced its first production car, the CC8S, in 2002 and it aimed to be the fastest road-legal car in the world.

Without any pedigree in racing or any other sports car built before, the Swedish car manufacturer nailed it! It managed to define the hypercar segment with one of the most challenging spell names on the market. Moreover, it produced the vehicle with brilliant solutions, such as the patented dihedral-synchro helix actuation doors that made them open vertically, pivoting on a unique system.

The CC8S looked like no other car on the road. With its curved short front end and long greenhouse extended over the engine compartment, it wasn't a typical mid-engined car. The big, side-mounted air intakes started bellow the door mirrors. In the back, the carmaker placed three round lamps on the wide quarter panels and the reversing lights low on the bumper. A reversed trapezoidal shape exhaust system filled the car's center back, at the bottom, flanked by two diffusers.

Inside, the carmaker installed a luxurious yet sporty, leather-clad interior. There was a large dial-shaped control center on the center stack built from aluminum. A straight gear-stick popped through the center console with a simple, minimalist design. For the two occupants, Koenigsegg installed bucket seats with high-bolstered areas. Unlike most supercars, the CC8S featured a removable roof, which the driver could place in the front trunk.

But the magic was behind the cabin, where a 4.7-liter supercharged Ford V-8 engine was mated to a six-speed manual gearbox. In the end, Christian von Koenigsegg succeeded, and the CC8S was the fastest production car on the road, and he built only six of them. 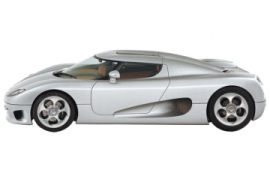