At the 2015 Geneva Motor Show, the small car-maker Koenigsegg unveiled the Agera RS.

It was a supercar developed to offer more performances on the track, but still legal to drive on the roads.

The Agera was one of the lightest cars on the road and the fastest car in the world. It was entirely built in-house. Apart from the brakes, tires, and the windshield wiper, everything is built by Koenigsegg and not by a third-part supplier. And one of the most expensive options on the list was the “One-megawatt” option, which increased the output up to 1360hp from the standard 1160 hp.

The Agera RS was based on the already famous Agera. It was built in 25 units between 2015 and 2018 and it featured a bigger air-intake for the engine, and other aerodynamic parts mounted on the car to increase the downforce.

Inside, there was a luxurious, yet sporty, interior. The seats were light, built on carbon-fiber support, and covered with Alcantara. The dashboard could have been customized by its clients.

The engineering part of this hypercar was the most important part. The main ingredient used for the bodywork was the carbon-fiber. Even the wheels were hollow and built from the same material. The 5.0-liter V8 engine was built from the ground up by Koenigsegg and the gearbox was developed in-house, following new engineering concepts. The Agera RS was the ultimate track tool, while still being able to be registered for road use worldwide, as it complied with the safety standards and other necessary homologation features. 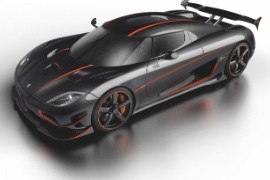