The Koenigsegg One:1 was the first “megacar” on the market and it was the first vehicle that featured both one-megawatt power and a power-to-weight ratio of 1:1.

Koenigsegg was made famous after the Agera model was launched in 2011 and it was different than other supercars on the market but in a good way. It was engineered to the max and featured a reworked 5.0-liter V8 engine. For the first model, it offered 960 hp, which was anything but slow. And the One:1 was built to destroy other car-makers records. It could accelerate from standing still to 400 kph (249 mph) in 26.9 seconds and brake in 483 meters (1584.6 ft).

The One:1 model featured the same aerodynamically shaped Agera form but enhanced with a different spoiler and air-intakes at the front. Its aircraft-style cockpit was accessed via two vertically opened doors, with a unique design. A Le-Mans inspired active wing configuration was installed in the back of the car.

Inside, the One:1 featured an Alcantara covered dashboard, with carbon-fiber and aluminum on the center stack. The race-bucket seats were built on a magnesium and carbon-fiber base and upholstered in Alcantara or leather.

The mid-engine megacar featured a slightly bigger displacement than the original Agera, with a 5.1-liter unit. It was mated to an especially engineered 7-speed dual-clutch gearbox with paddle shifters behind the steering wheel. It worth mentioning that the car was fitted with custom made Michelin Cup Tires that could support up to 2 g around the corners. The car could run with E85 biofuel, race fuel, or standard gasoline. 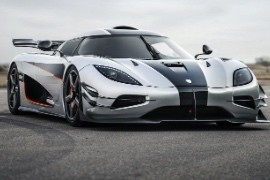