Koenigsegg celebrated its 15th anniversary with the launch of a new model, named Agera.

The Swedish producer released the Agera as a response to the Italian dominated world of supercars such as Lamborghini and Ferrari. Koenigsegg stayed true to its original philosophy and kept some of the shape and size of the original CC, which was created 19 years ago.

Surprinsingly, the Ager was lighter, more aerodynamic and more powerful than a McLaren F1. The striking V8 engines produced 910 bhp with over 1.000 Nm of toruqe and the car reached 60 mph in 3 seconds, and 100 km/h in no more than 3.1 seconds. The engine was paired with a specially made 7-speed dual-clutch gearbox and a new traction control system.
Both the front and the rear brakes are equipped with ventilated ceramic discs with 6-piston calipers. The front and the rear suspensions are equipped with adjustable dampers.

The chassis of the Agera is made out of carbon fiber and an aluminum honeycomb structure. The hardtop of the car is stowable under the front hood lid.
The interior comes with a neat feature designed by Koenigsegg; ghost lightning which uses invisible nanotubes to shine through billet aluminum buttons and other surfaces creating excellent symbol visibility and a cool look. The racing style of the Agera is also boosted by the use of carbon fiber throughout the interior as well as a new instrument cluster able to show a G-meter, power meter, lap times and other road/track aids. 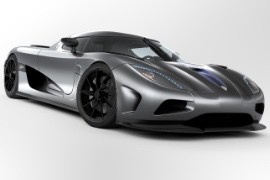