The face-lifted version of the Kia XCeed Sportswagon was received with great rumors at the end of 2019 and it is just the kind of Crossover Utility Vehicle whose existence is hard to understand, but it is asked by a certain amount of customers thinking they need a station wagon with a little bit of ground clearance and huge font and rear overhangs.

The XCeed has a bigger ground clearance than the rest of the Kia Ceed range and the intention was to offer a wagon for both urban and in-nature environments, dedicated to the young and adventurous customers who are willing to go hiking or biking in forests.

Even though it does has a higher ground clearance, this does not mean that it is a car good at off-road. At most, it may cope well with roads that have potholes, dust, mud or tracks from bigger vehicles. Its 2WD formula though doesn't recommend it to be used as an SUV.

The base model is powered by a 1.0-liter turbocharged gasoline engine with 120 HP while the top performer uses a 1.6 liter gasoline-turbo with 204 HP. The transmissions available are either six-speed manuals or 7-speed double-clutch. For Europe, Kia offers a 1.6-diesel unit in two power variants: 115 and 136 HP. 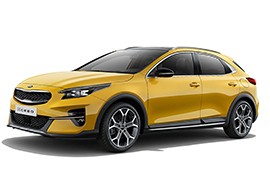 5 Kia To Start Manufacturing Electric Vehicles in the U.S. From 2024