Kia refreshed the Soul lineup for the 2023 model and unveiled it at the beginning of 2022, boasting a wider choice of trim levels and increasing the safety features.

When the Korean carmaker introduced the first generation of the Soul in 2008, it was a surprise on the market. Few people expected that shape from Kia. Moreover, the vehicle appeared during the world financial crisis when the automotive world was badly wounded. And yet, by 2019, the Soul reached its third generation, and it was already available with electric and electrified powertrains. Three years after the model's introduction, the carmaker refreshed the lineup.

The front of the vehicle featured the most distinctive visual change of the car. Its narrow headlights and the slim line between them, combined with the broad lower grille on the lower bumper, offered a front fascia that resembled the Star Troopers. The Soul's profile kept the same two-box shape but enhanced with a black area on the C-pillar to give the impression of a floating roof. As expected, all lights (headlights and taillights) sported LEDs.

Kia offered the Soul in no less than five trim levels, starting with the LX and going up to the GT-Line Tech level. Apart from the former, all the other versions featured a 10.25" touchscreen placed atop the center stack. Another improvement was on the safe side, where Kia added Blind Spot Collision Avoidance (BCA) and Rear Cross Collision Avoidance (RCCA) for the base trim level.

The biggest surprise was under the hood, where Kia dropped all engines but one. It left the Soul just with the 2.0-liter inline-four that driven the front wheels via an automatic (CVT) transmission. 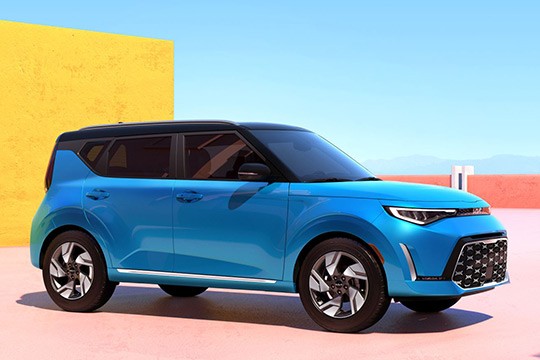