Kia unveiled the facelift for the Sorento's first generation in 2006, four years after the model's introduction.

The Korean carmaker already had some experience in building 4x4 vehicles, and it tried to get a more significant share of the market with the introduction of the Sorento lineup in 2002. It was built on a body-on-frame system, and it was Kia's first attempt to enter the mid-size SUV market. The result was more than satisfactory since the carmaker offered the vehicle at a price well below its competitors.

At the front, the main difference between the facelift and the non-facelift version was on the headlights. The carmaker moved the turn-signals on their lower outer side in a colored horizontal strip. Kia modified the grille, introducing a three-slat one instead of the previous one that featured one horizontal bar in the middle. In the rear, the taillights received a new design with smaller reversing lights. Depending on the trim level, the 2006 Sorento featured body-colored bumpers.

Inside, the carmaker offered more airbags than before, and that brought the car into the five-star crash-test rating performed by the NHTSA in frontal and side-impact. A major improvement was the dashboard, which was available in gray or tan with wood-trims on the center stack and door panels.

The most significant upgrade was under the hood. For the U.S. market, the Sorento replaced the older 3.5-liter engine with two new ones of 3.3-liter and 3.8-liter displacement. For specific markets, the Korean carmaker installed a 2.5-liter turbo-diesel. 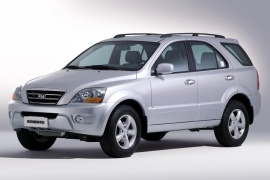