In 2001, Kia added a new facelift for the Shuma's second generation and sold it in the U.S. under the Spectra name, paving the road for a new nameplate in its lineup.

The Korean automaker was on the verge of creating new models and constantly improving its lineup, and the Shuma was one of its most important vehicles to do that. It was a low-priced, well-equipped, humble sedan. It could be a commuter car and a family vehicle as well. It couldn't impress anyone with its time on the drag-strip, but it was affordable, cheap to run, and cheap to insure. But Kia understood that the "Shuma" name was not attractive enough, so it tried a different approach.

With this new facelift, the carmaker improved the front fascia, which still kept the same headlights that cut a double bubble into the bumper, similar to the styling created by BMW for its flagship model, the 7 Series. The car's profile revealed a similar three-box sedan shape, with body-colored door handles and mirrors, which surprisingly were not available on other more expensive brands. At the back, the corner-mounted taillights were tall and flanked the trunk lid, or the tailgate, depending on the version. Because the Shuma II, or Spectra, was also available with a liftback version.

Inside, the customers could find most of the features that were available for extra money on other brands. Things like air-conditioning, a tape player, and power windows were now standard on the entire range. The sunroof and the automatic gearbox, on the other hand, were offered for an extra cost.

Under the hood, Kia used a 1.6-liter gasoline engine that provided 101 hp (102 PS), and it was paired as standard with a five-speed manual. A four-speed automatic was also on the table. 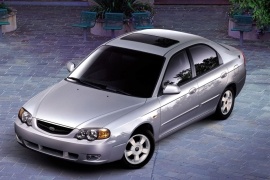