In 1998, Kia introduced the second generation of the Shuma on the European market, while the U.S. received a better car named Sephia or Spectra, depending on the bodywork version.

Kia designed the platform of the Sephia's first-generation and continued its progress along with the introduction of the 1998 Shuma/Sephia lineup. The young Korean carmaker took a bolder step on the second generation and drastically changed the design and the interior. Maybe not for a better one, but nevertheless different.

Just by looking at its front, some might think of a scaled-down four-eyes Taurus, which was already on the market for two years. But the Shuma was addressed to other markets. The U.S. customers received a more conventional design approach on the Sephia, the Shuma's sibling. From its sides, the European version showed its rounded body panels and shaved edges. Its three-box design shape was slightly altered by a wider C-pillar and the tall, short trunk.

The interior was quite interesting for the Korean carmaker. Its rounded shapes of the dashboard resembled those installed on the Ford Contour/Mondeo, with the driver surrounded by the instrument cluster and the center stack. Kia used to work with Mitsubishi and was inspired by its rounded buttons for the climate control, but placed them lower, harder to reach by the driver. In the back, the car offered just enough room for two passengers, while three were already too many.

Under the hood, Kia used a licensed-built Mazda engine and its own 1.8-liter unit. Both were paired to a standard five-speed manual. 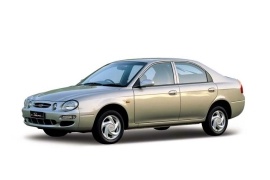