Kia refreshed in 2007 its flagship sedan model, the Opirus/Amanti, bringing more luxury and safety features in standard trim, while others were available as an option.

With a redesigned front-fascia, Kia hoped that it might get more customers into its showrooms to get an executive sedan. It was an interesting offer, with a good price/value factor but a design that could have been better. Way better.

On the outside, the addition of LED daytime running lights was welcomed by everyone, but the dual headlights system that resembled the old Mercedes-Benz E-Class W210 was not an appreciated part of the car. The grille sported a grid-pattern that some could think was inspired by Cadillac. On top of that, there was no Kia badge at the front. In the back, the new taillights design featured vertical lines for the brakes and turn signals, while the bumper sported two exhausts mounted on the sides.

Inside, there was a new trim option with black leather and black trims. Also, the carmaker tried to offer better wood-plastic trims on the dashboard and door panels. Its new sound system and improved buttons on the steering wheel showed better quality than before.

Under the hood, Kia asked Mitsubishi for help, and the Japanese carmaker offered them a 3.8-liter V-6 engine paired to a five-speed automatic transmission. This unit came to complete the three engines lineup. 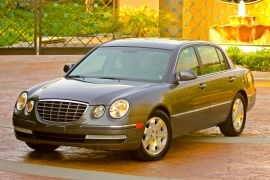