The Korean car-maker Kia unveiled the fifth generation of the Optima K5 in 2019 as a 2020 model year.

It was based on the same platform as the Hyundai Sonata.

Despite the ascending trend for the SUV segment, Kia decided to keep the K5 sedan in its lineup for those who doesn't look for expeditions and doesn't need or want an SUV. A light sedan could provide the same comfort and amenities as an SUV but being more fuel-efficient at the same time.

The new design language adopted by Kia for the Optima K5 was different than before, with angular shapes and a "Shark-skin" mesh-grill. It was not an evolution over its predecessor, but more like a leap. Despite being introduced in 2019, the marketing department decided not to fit the taillights with LED as standard, but to offer them on the options list, or only for the upper trim levels. It used the same strategy with headlights, and only the fog lights and the DRLs were with LED as standard.

The interior was another leap, with tons of gadgets and technologies available either as standard or on the options list. The infotainment system was floating on top of the center stack and almost got into the instrument panel. For the gear selector, Kia introduced an "aircraft-like" design, with a flat knob on top of it. The car-maker arranged a comfortable bench and enough legroom and headroom for the rear passengers despite the sloped roofline.

Under the hood, the K5 featured a choice of two engines. The base model featured a 1.6-liter unit while the top version was fitted with a 2.5-liter unit. All of them were turbocharged and feed via a direct fuel injection system. An all-wheel-drive traction system was available, but the 8-speed automatic transmission was fitted as standard. 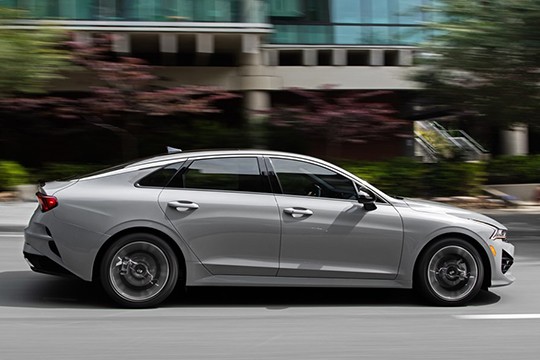