Kia opened a new chapter in its design philosophy when it unveiled its new EV6 model in 2021, a crossover that distanced itself from the "tiger-nose" aesthetic concept.

Karim Habib was head of design for BMW, Mercedes-Benz, back to BMW and then went for Infiniti before joining the Hyundai-Kia. The Lebanese-Canadian designer was responsible for more success stories in car design and took the Kia to a different level with the introduction of the EV6. Kia's Head of Global Design Center named its new design concept as "Opposites United," combining older elements with futuristic lines.

At the front, the pinched grille that formed the tiger-nose concept imagined by Petter Schreyer was abandoned. Habib spread a narrow opening between the headlights, stuck between the hood and the bumper. He designed a broader grille at the bottom to help to cool the batteries and the electrical system. From the sides, the EV6 shown its crossover design style with a tall beltline that was curved upwards in a kick behind the rear doors. Its sloped windscreen and vertical rear panel resembled the Kamm-back design from the '70s.

Inside, the designer continued its concept. While the middle and lower part of the dashboard was part of the old school, with haptic buttons and manually adjustable vents, the upper side featured a sloped clean area and a curved ultra-widescreen for the instrument panel and the infotainment touch-screen.

Since the car was built on the new Electric-Global Modular Platform (E-GMP), the EV6 showed Kia's desire to mark its presence on the world electric vehicle market. It surely got everyone's attention. 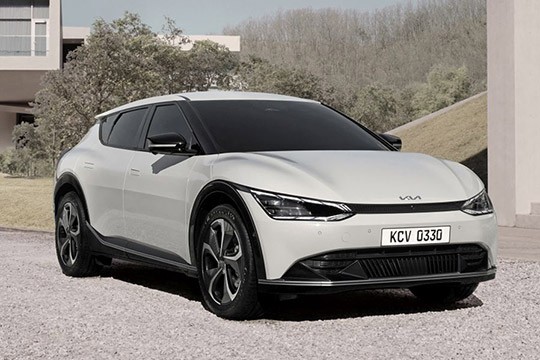