The 2021 Kia Carnival on U.S. soil was the moment when the Korean carmaker placed its new logo onto a vehicle, and that was a large MPV.

Minivans were not that much popular as they were in the late '90s, and the SUVs were the keys to success. Kia took a different approach and designed an MPV like an SUV or the other way around. The Carnival/Sedona was introduced in late 2020 for other markets with the older, oval logo, while for the U.S. premiere, it brought it with the new one with stylized lettering that could be read as KIA or, with Russian letters, as KI.

The 2021 Carnival/Sedona looked like an SUV with rear sliding doors and a lower ground clearance. Its distinct, two-box bodywork featured a hood almost parallel to the ground, like most big-sized SUVs such as the 2017 Ford Expedition or the 2020 Chevrolet Tahoe. Its very long rear sliding doors and the raked forward C-pillar were a new design pattern for the Korean MPV.

Inside, Kia arranged up to three rows of seats for eight occupants. The middle seats from the second row could slide and be tilted for more comfort, while the middle seat could have been completely removed for easier access to the third row. Kia installed a pair of wide seats and a premium-looking dashboard with wood, leather, and metallic trims at the front. Depending on the trim level, the Carnival/Sedona featured analog dials for the instrument panel or a TFT display. Kia installed a wide touch-screen on top of the center stack for the infotainment unit.

Kia installed a choice of two engines in the Carnival/Sedona, depending on the market. Its 3.5-liter V-6 was available on all the markets, while the turbo-diesel was not. The carmaker paired both versions to an 8-speed automatic transmission that sent the power to the front wheels. 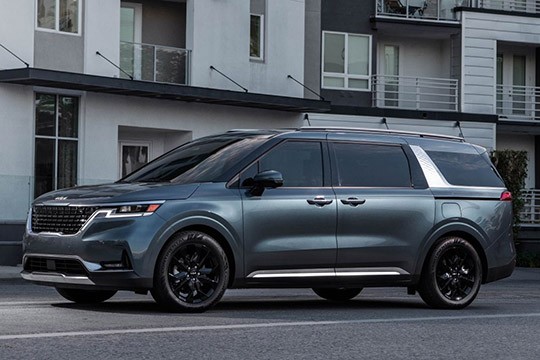