Jeep continued the Wrangler saga, and, despite being offered a choice of diesel and gasoline engines, it managed to implement a plug-in hybrid system for the well-known off-road vehicle. The most challenging part was to keep its legendary off-road attributes while still being environmentally friendly. For that, it mounted a nickel-manganese-cobalt battery pack under the rear seats and protected them in a sturdy aluminum case.

At a glance, it was easy to spot a 4xe from the rest of the Wrangler range due to its charging port on the left side of the vehicle, at the bottom of the windshield. The Rubicon version featured blue tow-hooks both front and rear.

Inside, the car was very similar to the rest of the Wrangler range, but with a few different buttons for the plug-in hybrid system. Also, on top of the center stack, a special lamp with integrated blue LEDs showed the charging status without the need for a designated app.

The drivetrain was the most significant part of the car with its dual-motor system. Under the hood, a starter-generator helped the turbocharged inline-four gasoline engine. Jeep integrated the second electric motor into the eight-speed automatic transmission supplied by ZF. From there, the hybrid system sent the torque to the wheels via a usual Jeep 4x4 system. Like its siblings, the 4xe featured a front and solid rear axle. 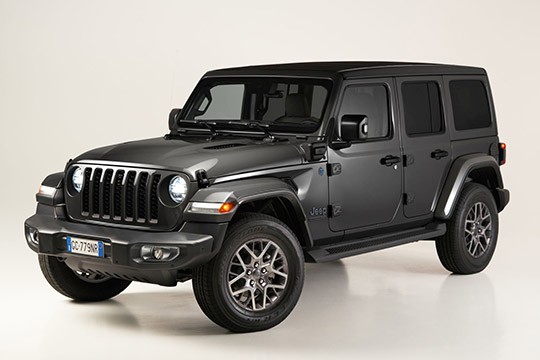 1 2023 Jeep Baby SUV Spied for the First Time, Should Start Production This November