Jeep made an essential upgrade on the Wrangler's second generation, also known as TJ, in 1996 when it introduced it on the market as a 1997 model.

When Chrysler bought the AMC in 1987, it didn't exactly know what to do with the Jeep Wrangler and left it with squared headlights, which Jeep fans disliked. Nine years later, the prominent American carmaker already knew what to change and made the TJ Wrangler a much better car. First of all, it ditched the leaf-springs and introduced the coil-springs and an improved suspension system, which allowed an increase in wheel-travel, essential while off-roading. Then, it made it cheaper to build in both LHD and RHD versions.

The 1997 Wrangler marked the return to round headlights. The seven-slat grille was similar to the one existing on its predecessor. Also, the carmaker kept the exterior latching system for the hood. Its windshield was pushed forward and shortened, thus decreasing the wind resistance and increasing the fuel efficiency.

Inside, Chrysler installed front bucket seats with integrated headrests for the front occupants, while in the rear, it kept the two-seat bench. Due to the short wheelbase, it wasn't easy to keep someone on the back seats for longer distances. The Wrangler TJ kept the original advantages, such as the removable top and doors and the flat-folding windscreen.

The most important update was for the drivetrain, which carried over many parts from its bigger brother, the Grand Cherokee. Apart from the suspension system, it took the steering box and the inline-six, 4.0-liter engine. However, the base version was a 2.5-liter gasoline engine, which was good enough for in-town driving. All Wranglers came fitted with a 4x4 system and a shift-on-the-fly, two-speed transfer case. 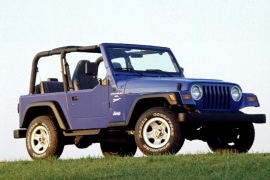