Replacing the open-body veteran CJ, the new Wrangler was the most rugged Jeep with enhanced convenience inside.

The Wrangler shared the steering, the brakes, the axles, the manual transmission, the clutch and the transfer case with the Cherokee and the Wagoner.

Also called the YJ, the Wrangler was pretty similar in design with the CJ, however, it featured square headlights and had a lower center of gravity, and featured a heavy roller protection on the side, as well as behind the front seats, offering great stability and less body roll in turns.

Inside, the rudimentary controls and the painted steel dash were dropped, the Wrangler featuring a modern dashboard with 4 gauges as standard. The front seats were comfortable, however, they had short and narrow bottom cushions.

The rear cabin did not offer great legroom for the passengers, mostly because the right front seat was not adjustable. Entering the back seats was easy with the foldable front seats. The back seats also folded if more cargo room was needed.

With a choice of two engines, the Wrangler was available with a 2.5-liter 4-cylinder unit or a 4.2-liter inline-6 powerplant, both mated with a standard 5-speed manual transmission. 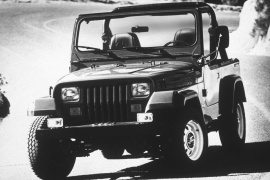