Jeep introduced the Grand Cherokee L at the beginning of 2021, just in time to be deployed at full scale when the world pandemic was done.

Chrysler promised a certain level of autonomous driving experience and a hybrid version for the Grand Cherokee's fifth generation. It was a big gamble, and they knew it. The customers started to demand more eco-friendly vehicles than hard-core off-road cars, and the carmaker worked hard to deliver what the market asked for, even though in the beginning, the engineers just carried over the previously used engines from the Grand Cherokee MK IV.

The design team burned the midnight oil to finish the car's final touches during the pandemic situation. It exchanged some terabytes of information during the extended Zoom discussions, but the final result was respectable. With wider gaps between the seven vertical slats, its front fascia resembled the 2022 Grand Wagoneer, while the extended greenhouse made the SUV look sportier than before.

Inside, the 2021 Grand Cherokee L was available with three rows of seats, either with room for six or seven occupants. The middle and the last row were folding flat and slide forward to increase the trunk space. Also new was its 10.25-inch digital gauge cluster with nearly two dozen different menus from which the user could select, including driver-assist technologies.

The engineers relied on the already proven engines from the fourth-generation of the Grand Cherokee under the hood, but they worked harder for the transmission systems. There were three versions for the mid-size SUV. The base version featured an all-wheel-drive system without low-range gear. Only the second and the third levels were available with that, and the latter featured an electronically controlled limited-slip differential. 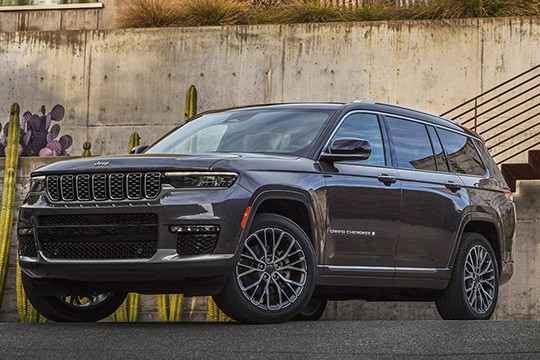