The fourth generation of the Jeep Grand Cherokee was introduced in 2009 at the New York Auto Show and it was facelifted in 2013.

For the 2014 model year, the Grand Cherokee received more updates in terms of on and off-road performance. Since Chrysler is into an alliance with the Fiat, the Italians couldn't let a facelifted model go out without several exterior improvements.

On the outside, the 2013 Grand Cherokee showed different headlights and front bumper design. The Trailhawk version received additional underbody shields and higher ground clearance. With a new set of wheels and off-road tires, the Trailhawk was ready to tackle serious off-road tracks. Permanent tow-hitches front and back were installed. An air-suspension was installed and that allowed an increase up to 11” (28 cm) of ground clearance.

Inside, there were new modifications in terms of infotainment and instrument cluster. The new Uconnect system was carried over and adapted from Fiat. It was available with several cameras to show a 360 degrees view around the car. Trailhawk-specific interior touches included black leather and performance suede seats with red accent stitching and Mopar slush floor mats front and rear.

For the engine compartment, the Grand Cherokee was offered with a new 3.0-liter turbodiesel V6 unit, that complemented the 3.6- and the 5.7-liter units. All versions were mated as standard with an 8-speed automatic transmission from ZF. 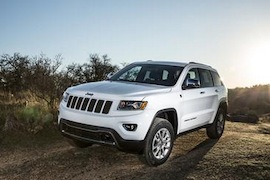