A popular choice in the SUV market, the Jeep Grand Cherokee’s history started back in the early ‘90s.

Designed for customers looking for both off-road capabilities and good urban skills, the Grand Cherokee was fitted with an advanced four-wheel-drive system, however, driving it around town was fun also.

Not fitted with the most spacious cabin, the SUV could have fell off the list for larger families, as the cargo area was rather small compared to other vehicles available on the market.

Under the hood, the JGC came with a choice of 3 engines, a V6 and two V8s.

While you would think opting for the V6 would have come with an improved fuel consumption, it was not the case with the 2010 model. Thus, many customers opted for the V8s, with power ranging from 357 hp to 420 hp with the SRT8 model.

The most powerful V8 unit rocketed the JGC to 100 kph in around 4.7 seconds.

Offered in three trim levels, the SUV was available either with a rear-wheel-drive or a four-wheel-drive system, while the SRT8 was only available with the AWD system.

The materials used inside the cabin were never the Jeep’s strongest point, however, the refreshed 2010 model upgraded their quality to make it more appealing to the customers. 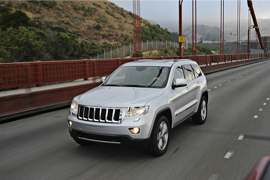