DaimlerChrysler unveiled a facelifted version for the WJ Grand Cherokee in 2003 for the last two years in production before the 2005 WK generation replaced it.

While the Grand Cherokee was already well known in the U.S., its presence on the European market was slim, mostly due to its size and low fuel efficiency. It was not a car for tight corners and narrow streets as those from Europe. Moreover, even though it offered a turbo-diesel version, it was too weak for the car's size. But the 2003 model came and fixed that too.

On the outside, the 2003 Grand Cherokee received a minor exterior update. At the front, the car sported a new design for the signature seven-slat vertical grille. In the lower part of the bumper, the carmaker placed round fog lights instead of the previously used rectangular, horizontal ones. Jeep installed a metallic shield under the engine compartment to emphasize the vehicle's offroad ability and extended it all the way to the front, under the bumper. On the sides, the 2003 model received additional turn signals.

Inside, Mercedes-Benz helped Chrysler in developing a friendlier interior. Jeep changed the older black dials inside the instrument cluster to white-faced ones with black needles. Other changes included fewer wood trims on the center stack and center console.

Under the hood, the most significant novelty for the Europeans was the 2.7-liter turbo-diesel engine carried over from Mercedes-Benz. It replaced the older WM-Motori 3.1-liter unit and provided more power and torque while offering better fuel efficiency. For the U.S. market, the most important addition in terms of engines was the 4.7-liter High Output unit that provided 30 more horses. 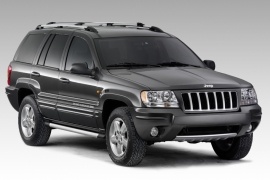