Developed in just 28 months and sharing only 127 parts with its predecessor, the 1999 Jeep Grand Cherokee – WJ represented a leap forward for the Jeep's flagship model.

Made during the DaimlerChrysler alliance, the Grand Cherokee WJ was produced on four continents and featured significant technological upgrades. Some of them were carried over from Mercedes-Benz, while the two carmakers jointly developed others. Its all-wheel-drive system and lighter, evolved engines led to better fuel efficiency as well.

From the outside, it was clearly a Jeep. Its seven-slat grille was already a signature element. Since it was developed at the beginning of the new-edge-design era, it sported rectangular headlights but with rounded corners. Its bumper sat high to improve the approach angle, and only those who didn't want to take it off-road chose the optional aluminum side steps, which decreased the break-over angle. Its flared wheel-arches gave the impression of a true off-road warrior. Jeep even marketed it as "the most capable SUV ever."

Inside, depending on the engine option and trim level, the carmaker installed comfortable seats with velour upholstery, with an option for a leather-clad interior. The carmaker installed a wide center console for both levers between the front seats: the gear-selector and the transfer case lever. Jeep placed the audio system at the top on the center stack while in the mid-area installed the climate control dials and two vents. The Grand Cherokee sported two large dials for the speedometer and tachometer and another four gauges for various systems in the instrument cluster. 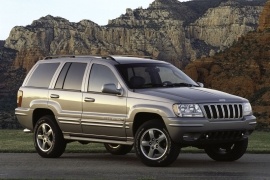