The Grand Cherokee's story begins some time in 1983 when AMC was designing a successor for the smaller Cherokee XJ.

he buyout of AMc by Chrysler pushed back the release date of the production car that had the prototype ready by 1989. The car came out eventually in 1993 as a direct competitor of the Ford Explorer at the North american International Auto Show in Detroit. The first version was called the ZJ and it came with 3 trim levels: the Base, Laredo and the Limited as top of the range. The car remained in production until 1999, with a facelifted version in 1995 when the engine and the overall appearance were upgraded. 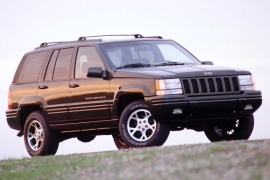